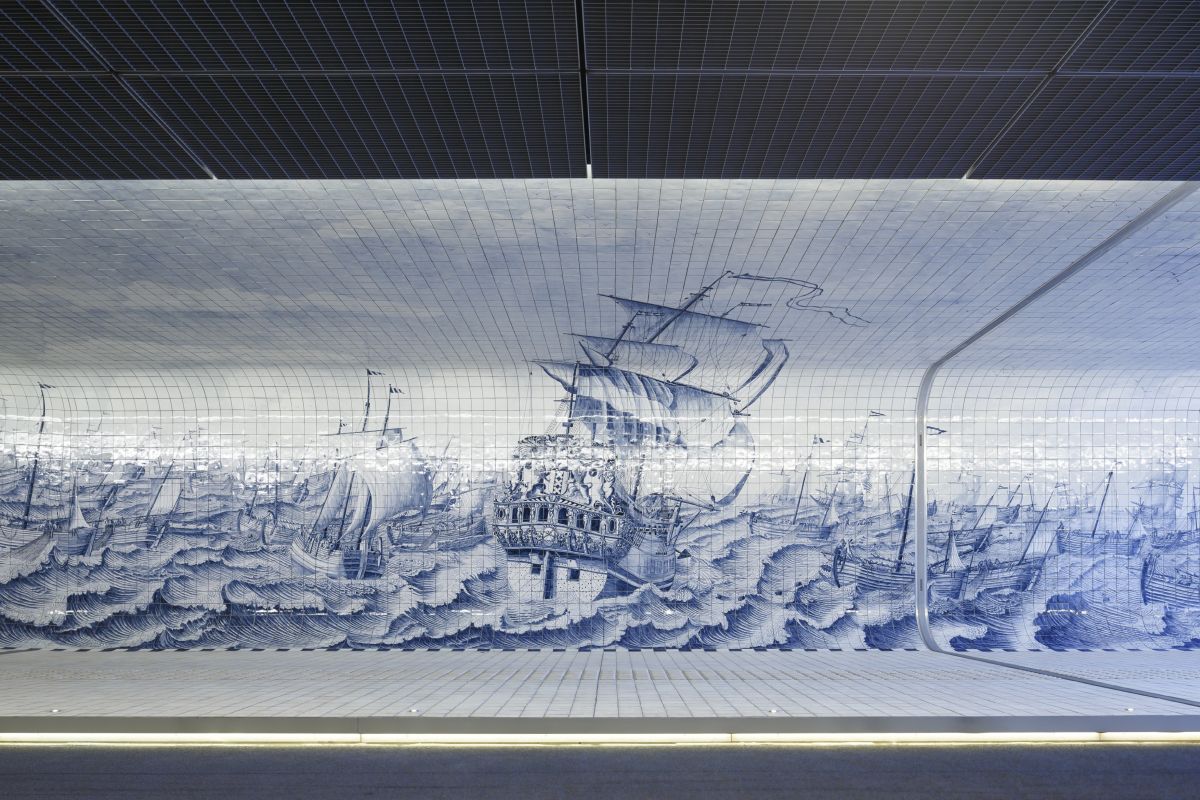 Cuyperspassage by Benthem Crouwel Architects in collaboration with Irma Boom

“Cuyperspassage is the name of the new tunnel at Amsterdam Central Station that connects the city and the waters of the IJ-river. Since the end of 2015 it has been used by large numbers of cyclists, some 15,000 daily, and pedestrians 24 hours a day. This ‘slow traffic corridor’ was exactly what many users of the city felt was lacking. What once was by necessity a left or right turn is now, at long last, straight ahead. The tunnel is clad on one side by nearly 80,000 Delft Blue tiles: a true Dutch spectacle at a central spot in Amsterdam.

A clear division
The tunnel is 110 metres long, ten metres wide and three metres high. Its design makes a clear division between the two modes of travel. By making the pedestrian level appreciably higher than the cycleway, pedestrians know where they have to be and feel safe there. Cyclists enjoy the spatial sensation of a rapid through route, accompanied by a continuous run of LED lamps along the raised edge of the footpath. The pedestrian path has a smooth finish of handmade glazed ceramic tiles. The cycleway by contrast has a rougher, open finish of black sound-absorbing asphalt and steel gratings. This is to enhance user comfort, given the tunnel’s concrete structure and great length. The gratings are impossible to litter with posters and flyers and their open structure reduces the risk of graffiti.

Urban room
Along the footpath wall is a tile tableau designed by Irma Boom Office. The design steps off from a restored work by the Rotterdam tile painter Cornelis Boumeester (1652-1733). His tile panel depicting the Warship Rotterdam and the Herring Fleet is in the collection of the Rijksmuseum, Amsterdam. Irma Boom replaced the original crest on the stern with the Amsterdam coat of arms. The cyclist or pedestrian leaves the old historic part of Amsterdam through Cuyperspassage and heads towards ‘new Amsterdam’ in the north, or vice versa. The tableau fades away towards the IJ-river, the lines of the original work gradually dissolving. Then it builds up again in an abstract form from light to dark blue, as if encouraging cyclists to slow down as the ferry comes into view. Its drawn lines and pixels also visualize the transition in art from the old to the new. The ceramic company, Royal Tichelaar Makkum, spent five years making the 46,000 wall tiles for the tableau, as well as 33,000 floor tiles, in the traditional Dutch tile size of 13 x 13 cm. In it, we see large and small merchant vessels, herring busses with nets in place, churning waves, gulls. The whole recalls old kitchens in Amsterdam canal houses, so that the tunnel is experienced as a safe place – as an urban room.

The Cuyperspassage is part of the overall master plan for Amsterdam Central Station – a project by Benthem Crouwel Architects, commissioned by the Municipality of Amsterdam, ProRail and Nederlandse Spoorwegen.” 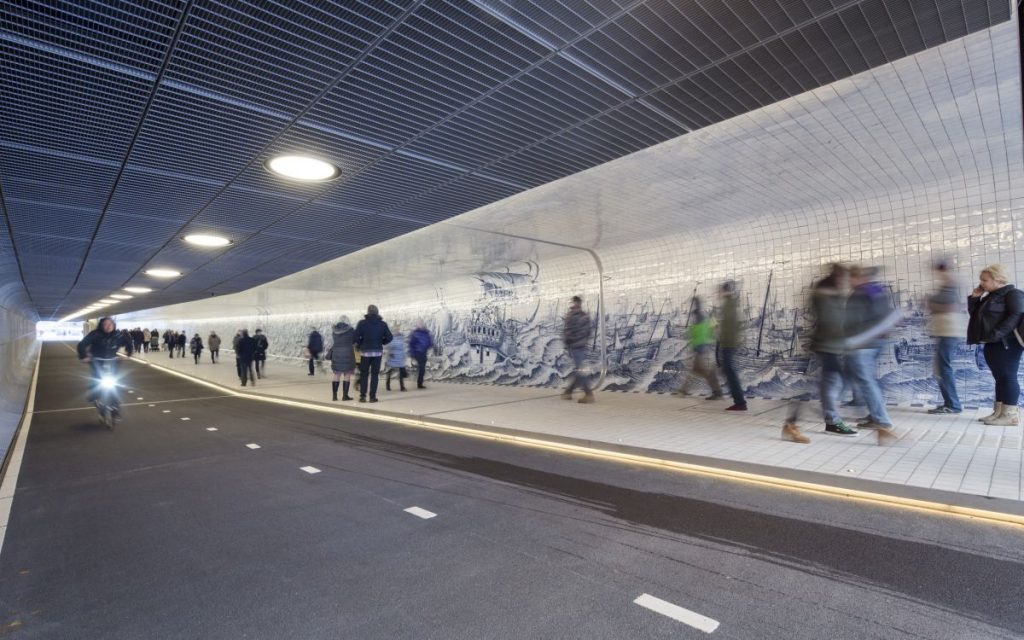 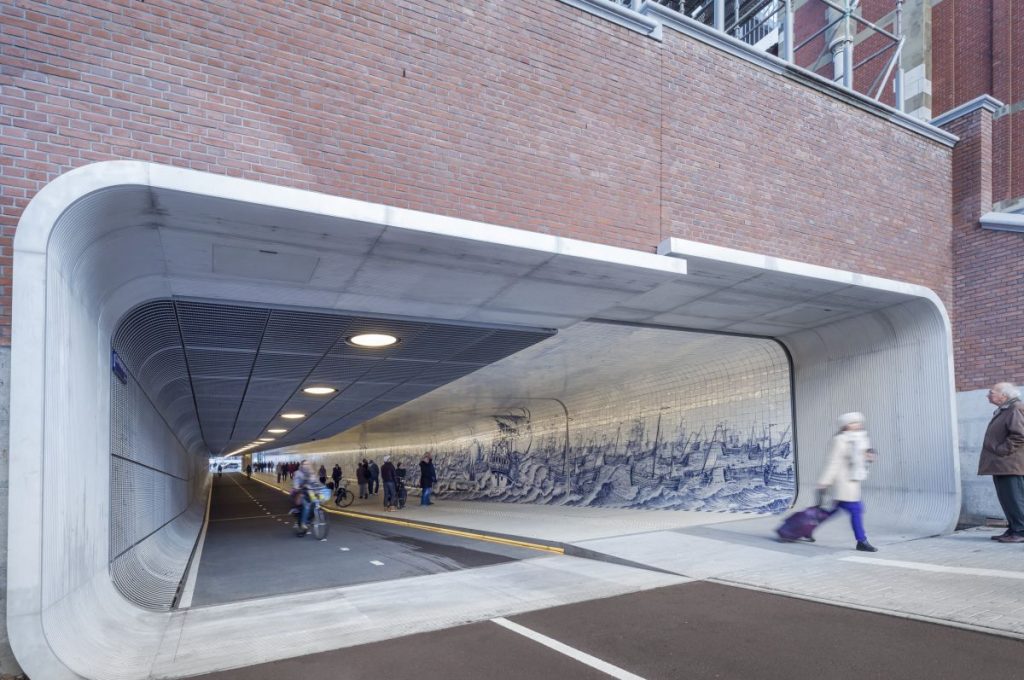 Published: April 21, 2017 Author: Wisse Trooster Category: Architecture, Dutch Design
Previous: THIS FITS ME BY LEONIE TENTHOF VAN NOORDEN
Next: MILKYWAY BY DENNIS PARREN
We use cookies to ensure that we give you the best experience on our website. If you continue to use this site we will assume that you are happy with it.I accept