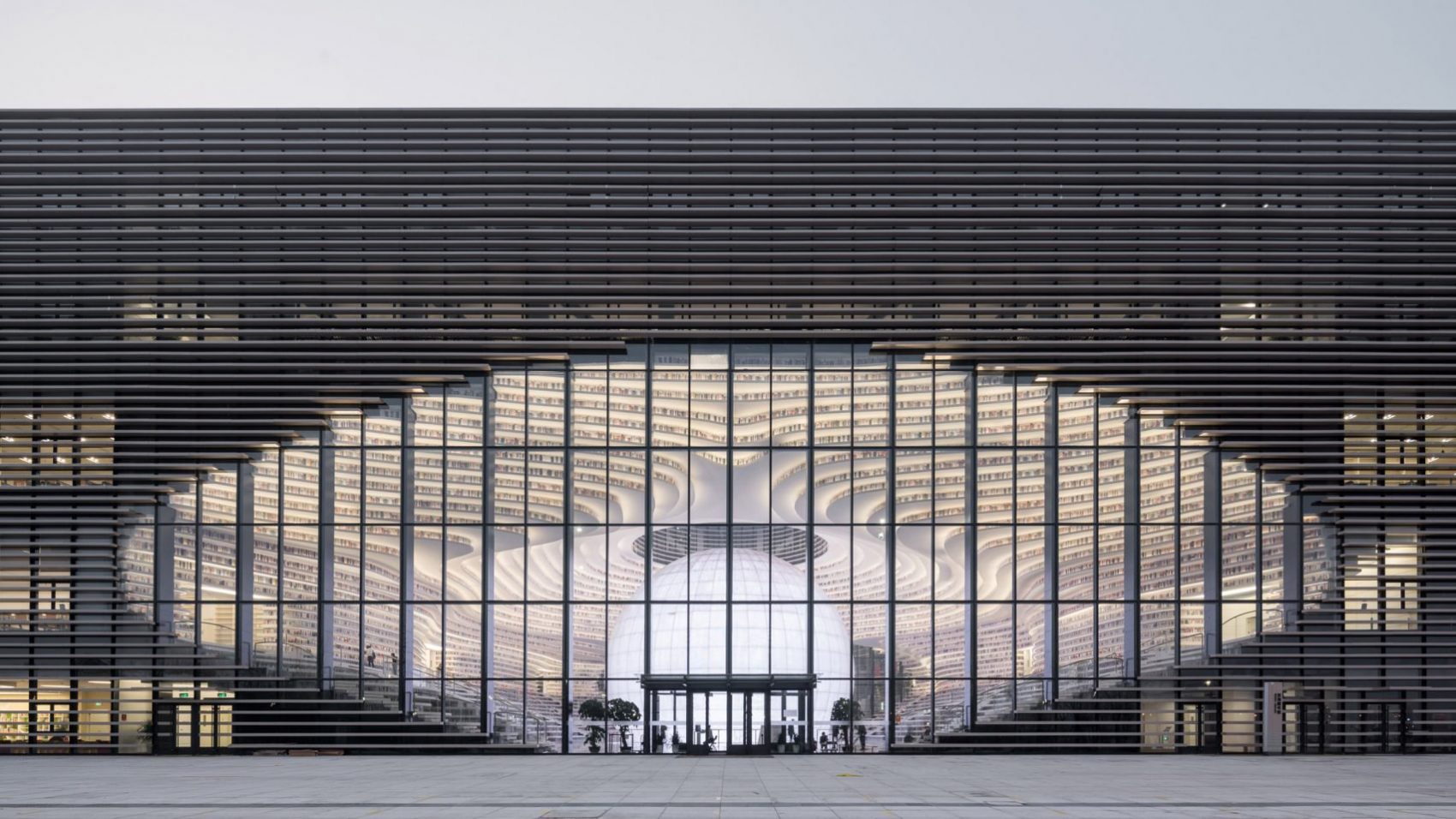 “MVRDV and Tianjin Urban Planning and Design Institute (TUPDI) have completed Tianjin Binhai Library as part of a larger masterplan to provide a cultural district for the city.

The 33,700m2 cultural centre featuring a luminous spherical auditorium and floor-to-ceiling cascading bookcases not only as an education centre, but also social space and connector from the park into the cultural district.An oval opening punctured through the building is propped open by the Eye, a luminous sphere with an auditorium, which takes the main stage within the atrium and enlarges the perceived space within. Terraced bookshelves which echo the form of the sphere create an interior, topographical, landscape whose contours reach out and wrap around the façade. In this way, the stepped bookshelves within are represented on the outside, with each level doubling up as a louvre. 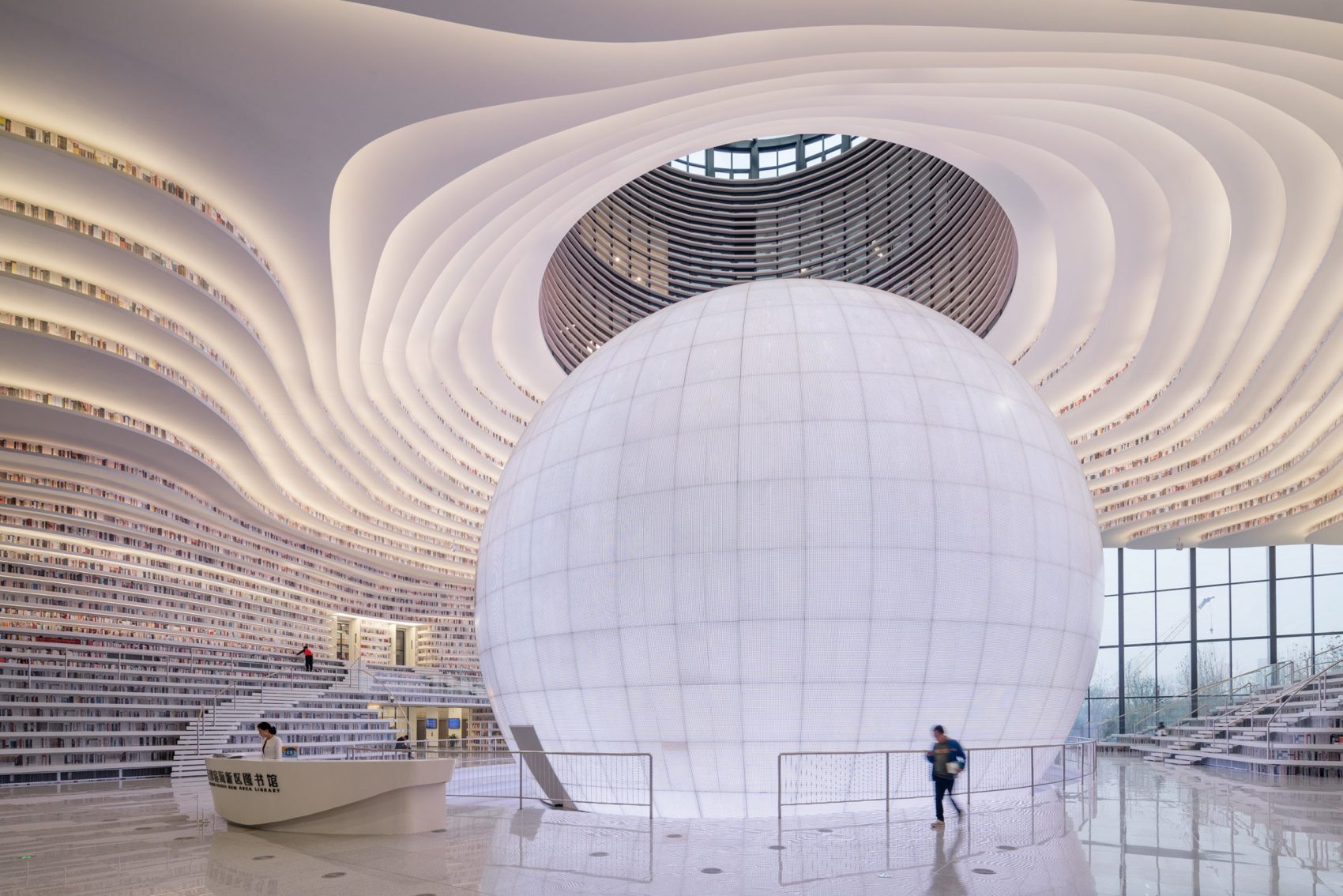 The futuristic library sits within a sheltered gallery, topped with cathedral-like vaulted arches, which winds its way throughout the scheme. MVRDV’s project is surrounded by four other cultural buildings designed by an international team of architects including Bernard Tschumi Architects, Bing Thom Architects

The five-level building also contains extensive educational facilities, arrayed along the edges of the interior and accessible through the main atrium space. The public program is supported by subterranean service spaces, book storage, and a large archive. From the ground floor, visitors can easily access reading areas for children and the elderly, the auditorium, the main entrance, terraced access to the floors above and connected to the cultural complex. The first and second floors consist primarily of reading rooms, books and lounge areas whilst the upper floors also include meeting rooms, offices, computer and audio rooms and two rooftop patios. 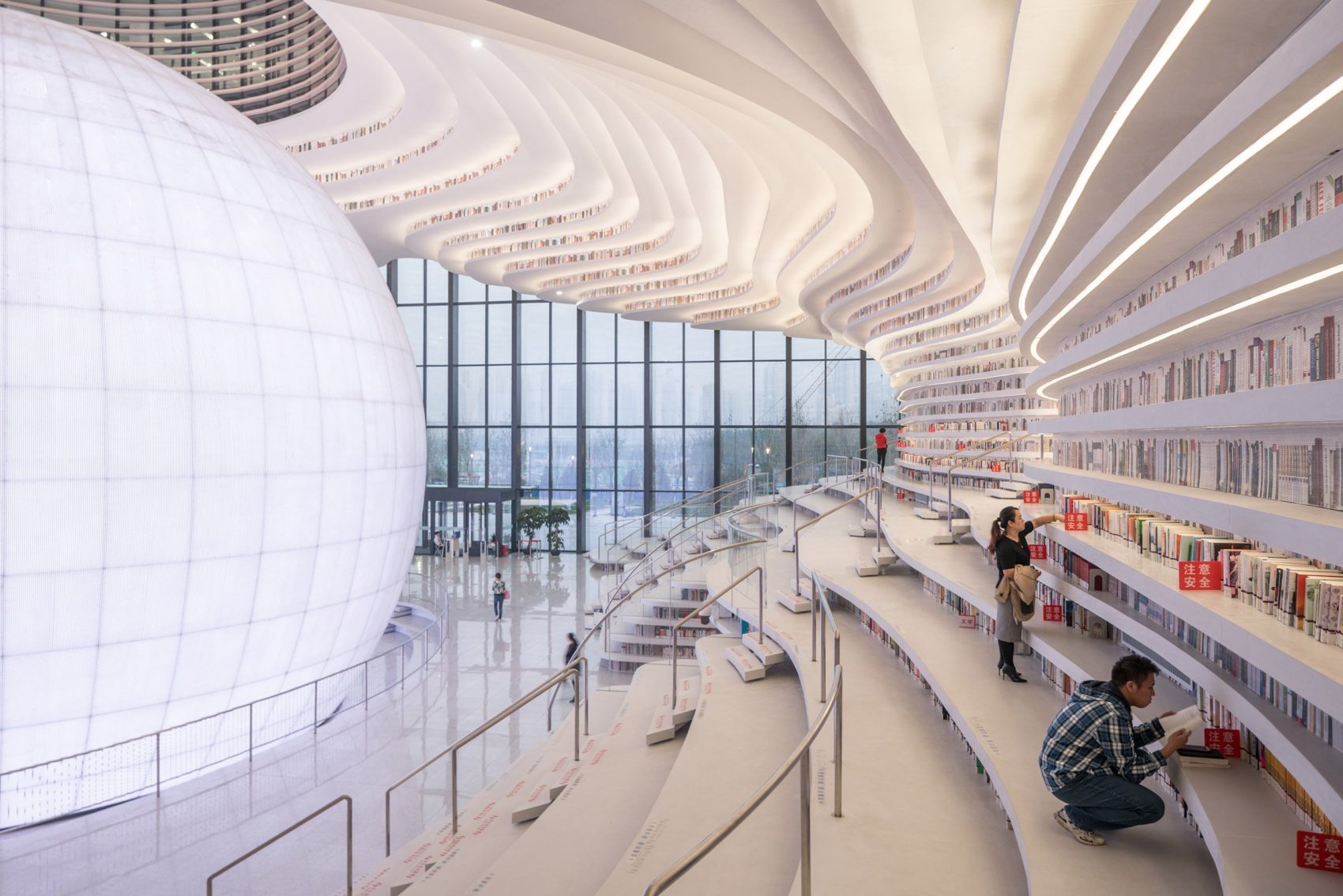 Tianjin Library is part of German architects GMP’s 120,000m2 masterplan which aims to accentuate the characteristics of the surrounding districts. Through its design, the complex will become a junction point for the CBD, old town, residential districts, commercial areas and the government quarter; hoping to compensate for any missing programme in each. The library’s outer volume was given in the masterplan so the Eye and its surrounding semi-public area are an internal space, like an inverted icon, acting as a central point and folly in the building.

The library is MVRDV’s most rapid fast-track project to date. It took just three years from the first sketch to the opening. Due to the given completion date site excavation immediately followed the design phase. The tight construction schedule forced one essential part of the concept to be dropped: access to the upper bookshelves from rooms placed behind the atrium. This change was made locally and against MVRDV’s advice and rendered access to the upper shelves currently impossible. The full vision for the library may be realised in the future, but until then perforated aluminium plates printed to represent books on the upper shelves. Cleaning is done via ropes and movable scaffolding. 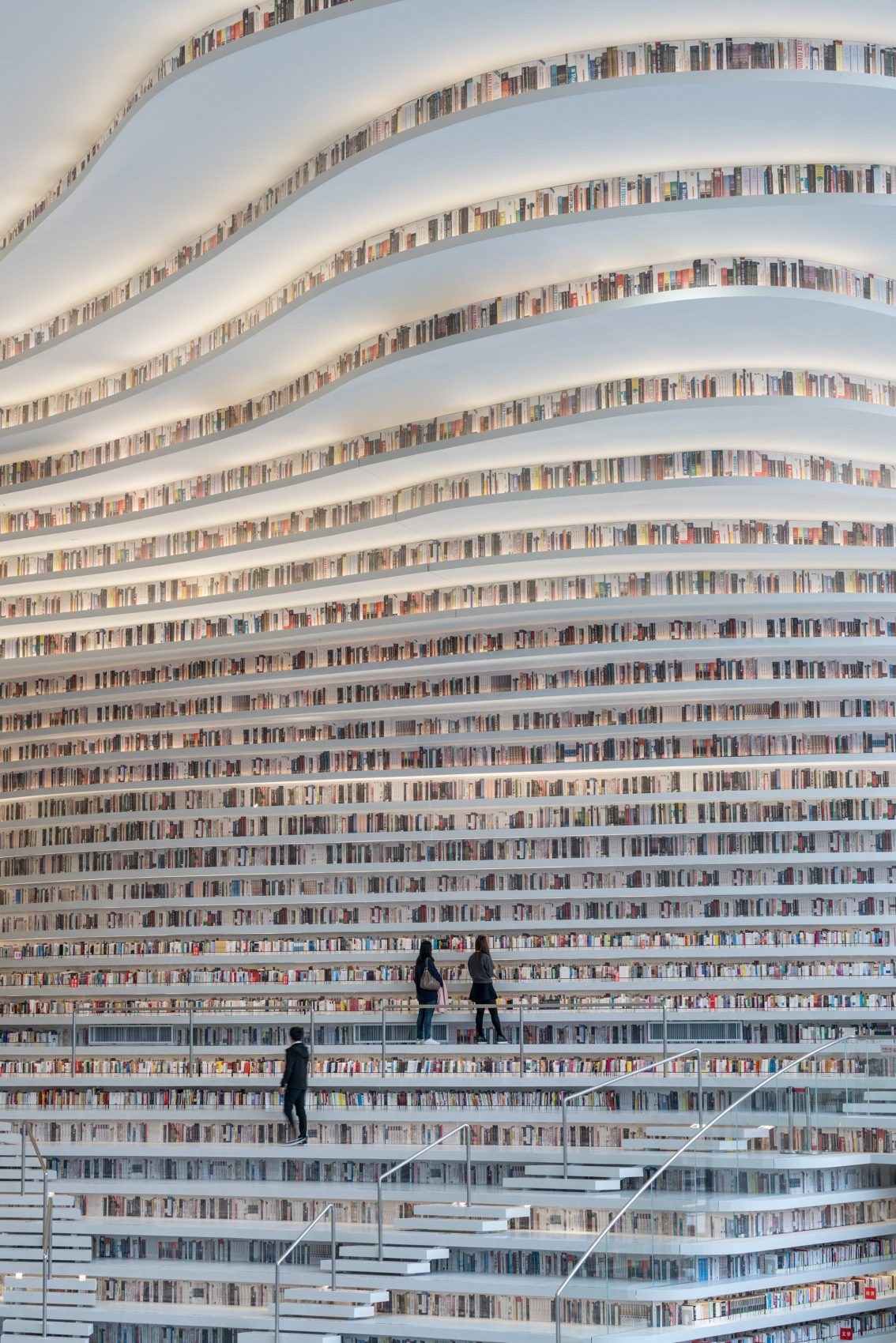 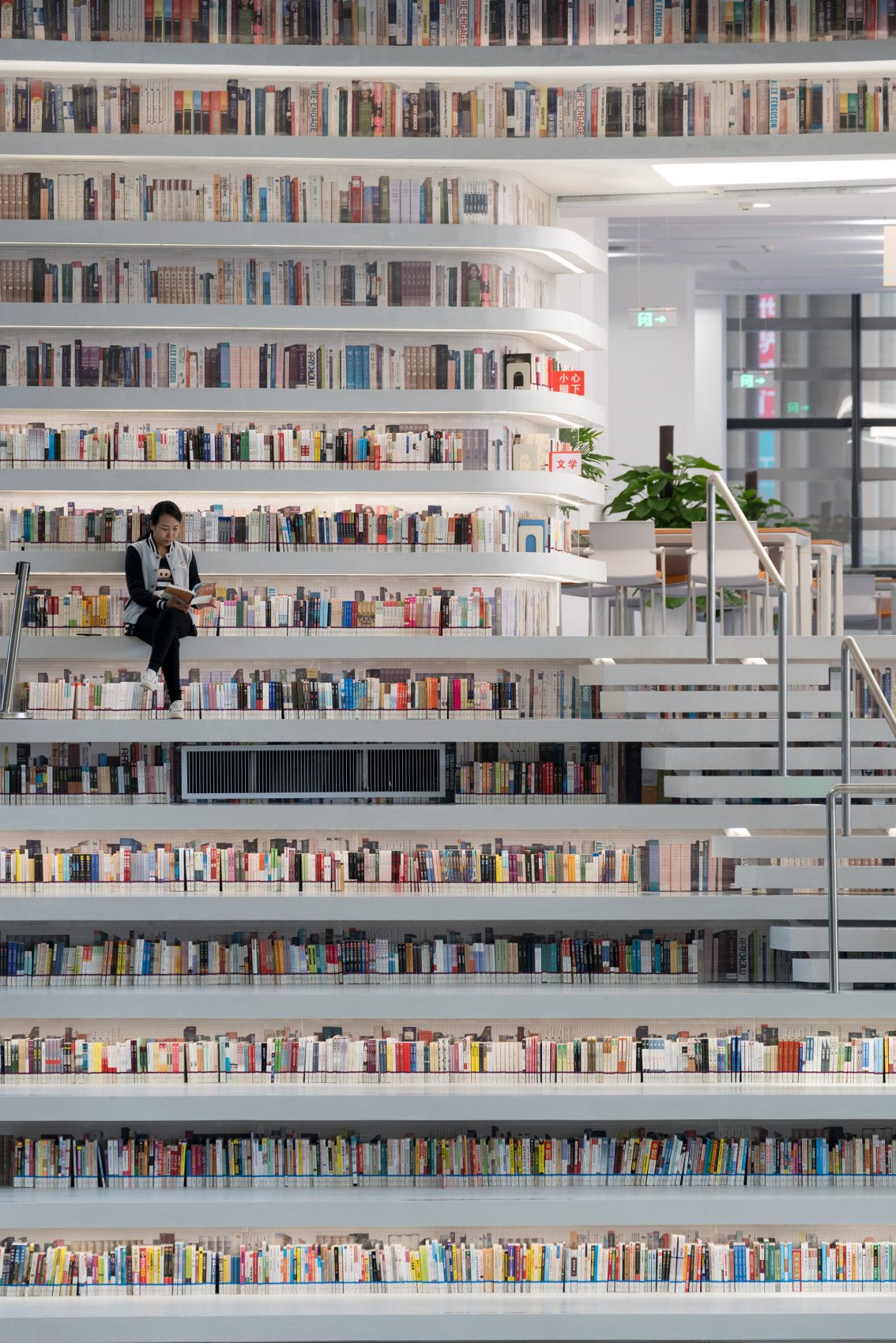 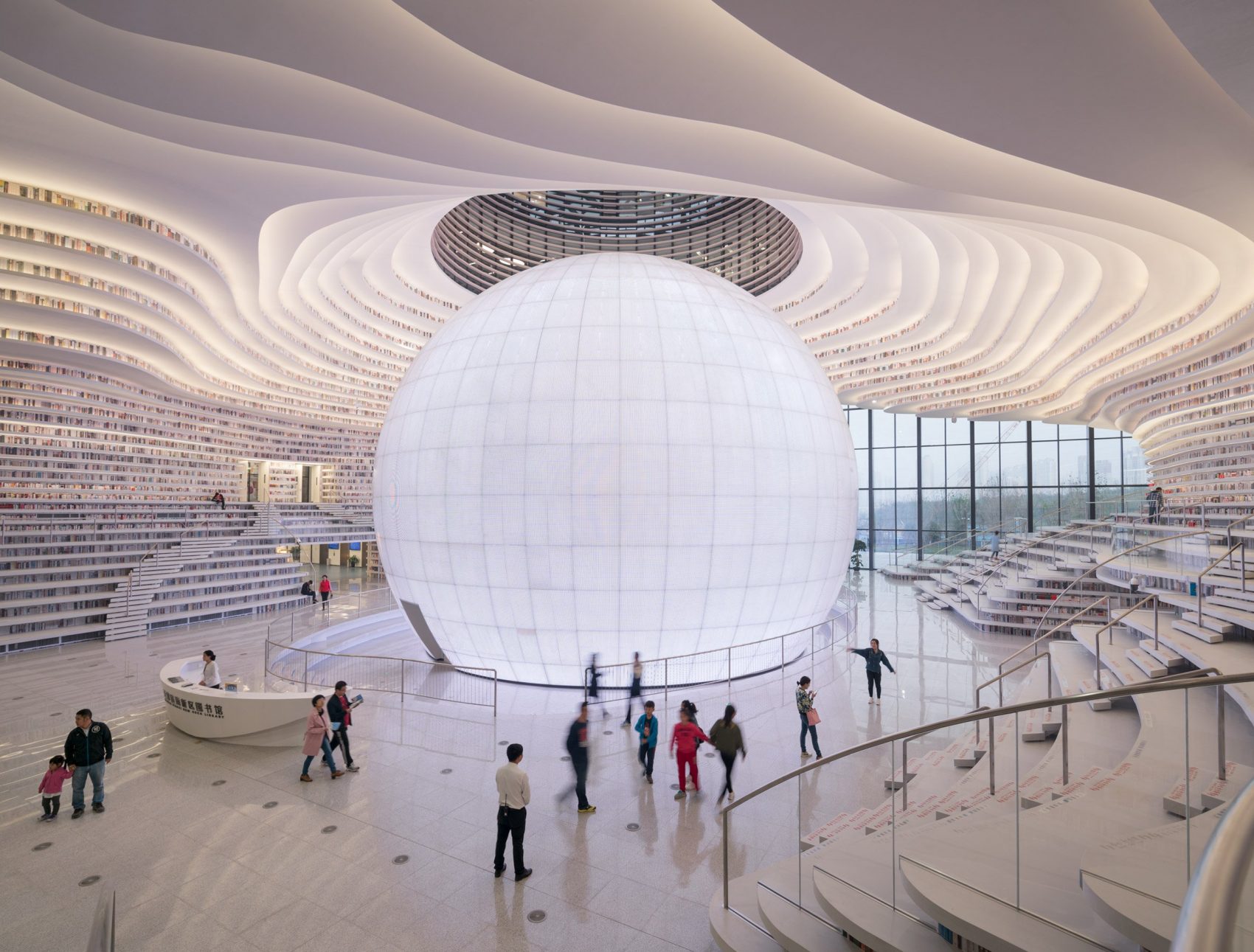 Text via MVRDV
Pictures via Ossip

Published: December 7, 2017 Author: Wisse Trooster Category: Architecture, Dutch Design
Previous: SINGLE SPARK BY SUPER LOCAL
Next: WATER TOWER SINT JANSKLOOSTER BY ZECC
We use cookies to ensure that we give you the best experience on our website. If you continue to use this site we will assume that you are happy with it.I accept